Moneyball, in 250 Words or Less 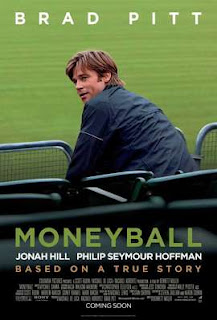 Can I do a review about a three hour long baseball movie starring Brad Pitt and Jonah Hill in under 250 words? Yes I can. Moneyball is the story of Oakland A’s general manager, Billy Beane’s attempt to change the game of baseball by recruiting a team of ragtag players based off of mathematical equations. The movie acts as the awkward lovechild of math and sports, but pulls off the theme rather well.

First, the bad news. The movie is long…too long. James Cameron Avatar Extended Edition long. It started at 3:15 and I just got home to review this at 6. There were too many unnecessary scenes and the movie almost started going in circles. It was obvious that not enough was done on the cutting room floor, but I can understand why, and this is really where the movie shines.

The good news: The cinematography is beautiful. If the movie was a person, it would win the Miss America competition. Every scene says something symbolically and helps move the plot. The director knew what he was doing.

Brad Pitt and Jonah Hill played an impressive performance and brought chemistry to the movie. I believed every word they said and every movement on camera. Bravo.

In the end, this movie appeals mostly to baseball fans, and to those who have always dreamed of changing the way people think. It’s a good time, so long as you have three hours to kill and a picture of your favorite team in your room somewhere.